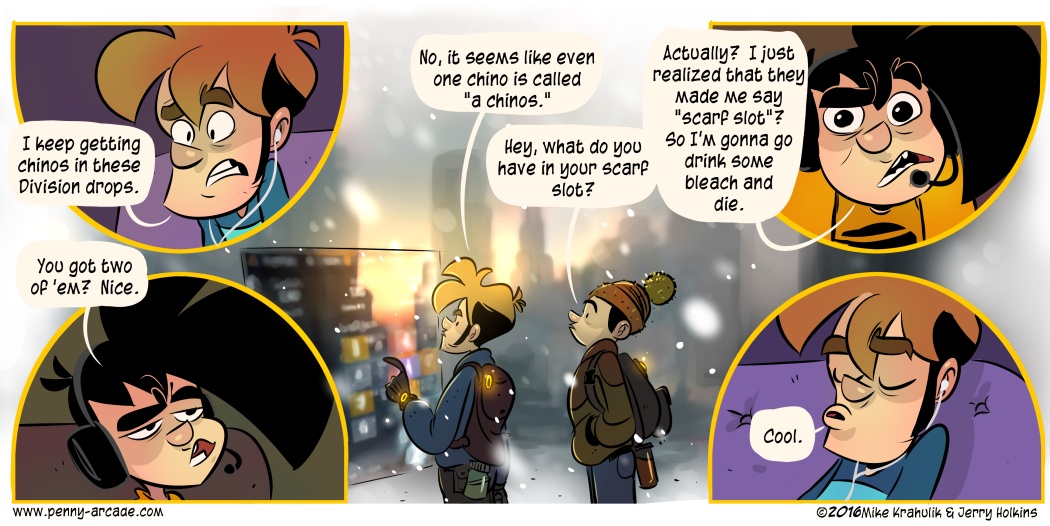 I've tried unsuccessfully to get him into the Division thing; believe me, it's not for lack of trying. It's precisely what happened with Destiny, where I found his baseless enthusiasm despicable and indecipherable, and shamed him at every opportunity. Except I was wrong that time, it just took me a very long to figure out; I wonder how it will go in reverse. "Not well," is my guess.

He tried to play with us night before last, but the level disparity was too much; Division doesn't have a smooth way of balancing these things out, which sucked, but he is also dogged by the Xbox at every turn in ways I've simply never experienced. Here's an example: he was not able to chat in the party. You know how he fixed it? Because this is some old school Sierra On-Line type shit: he had to change his region to the UK. To talk to this friends. That he couldn't meaningfully play with because of the level disparity. After he had fucked around with this for forty five minutes or so, I made a pact with him: that I would never ask him to play a game on there with me again, and this pact would go on, from son to son, for three generations.

When I came in the next day, he was sitting on the couch getting fucking wrecked in a story mission he was playing with Antonio Randeras and another profoundly underlevelled human anchor. They wiped five times in a row, which isn't what you're looking for in terms of a game sales pitch. The Division is actually kinda hard, though; it's one of the things I like about it. But it's not as hard as these hideous mutants were making it. Even so, he was still playing it. Maybe for me, but maybe not. I can't tell.

Realism is not something Gabriel finds interesting basically at all. He has no relationship of any kind to any of his guns in The Division, and he legitimately resents being made to learn muggle clothing terms like "slouchy beanie" or "trendy shemagh." You're not gonna get a Young Ahamkara's Spine, with its hints of a metaphysical payload, from any loot in The Division. So you can't really manipulate him the way you could in another game with "new art" which is what keeps him going in games. He likes playing it. He does! But the gear and presentation aren't mythic, they're "realistic." There's no aspirational firearm that takes up forty percent of the screen real estate to seek and claim. By making it realistic, at least for him, they've made it more abstract.

Kiko sees the game as the return of Rainbow Six: Vegas, with its savvy cover; I said that I felt that, except for the fact that R6:V was an FPS whenever you weren't in cover, and he said no it wasn't, but I'm right and he's wrong. Isn't memory weird? When strained through almost ten years of additional experiences, its incredible, never improved upon cover mechanic was the only thing left.