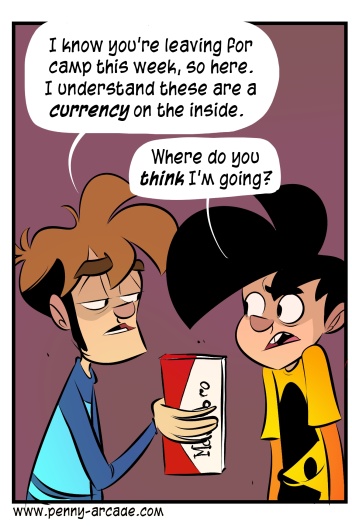 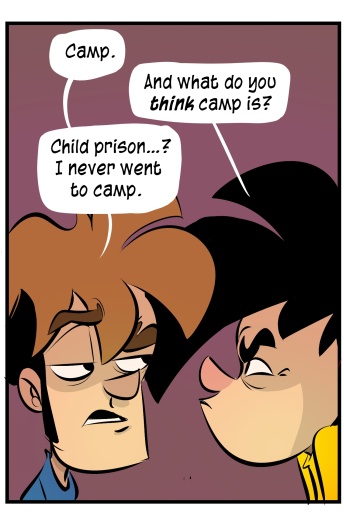 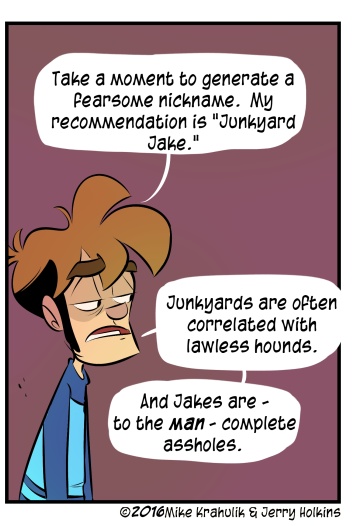 In what may well be the end of a School Camp Trilogy, today's strip is about school camp and is the third of its kind.

My own memories of School Camp are like stalactites of crystalline horror that grow down from inside my skull, all around my brain, forming a kind of "brain jail." When I started typing that sentence I didn't know how it was gonna turn out, but I think I like it. Also, I think I might still have issues from school camp to deal with. There was a dad there who kept trying to make us eat ants.

One of the best demos for VR in general and the Vive in particular is called Aperture Robot Repair. You could play it and be impressed regardless of your coordinate on the gamer spectrum, but if you've played Portal it's a thousand times more compelling, because you're going home.

There is a point at the end of the demo, though, that is interesting simply as an idea. The room around you is rebuilt into a test chamber, which aside from anything else, makes you feel a peculiar combination of nostalgic enthusiasm and authentic dread. It's a novel combo. At the same time, though, there's no path directly to that kind of experience with the tools provided: there's no way to play the Portal you know within the framework you have been given to experience it. There are a lot of "experiences" at this phase of Virtual Reality, as opposed to what you might call "games," but the conversation doesn't have that serrated edge it does around things like "walking simulators" because even if you're walking around the deck of a submerged ship you're still walking around the deck of a submerged ship. The stimuli payload is immense. Oh! And whales are big, y'all. I had a feeling they might be and I was right.

It wasn't until I had played Budget Cuts that I had any sense of how you would solve some fairly basic gaming necessities inside the visor. Like Job Simulator, it doubles as a game and also as a radical interactive manifesto, which isn't such a bad thing to be.

The level in the version of Budget Cuts I have access to is one in which you must sneak inside of a company and approve your own Job Application. Already, I like it. But it's a stealth game, in the mode of a Metal Gear, except you are actually there and it turns out that it's really scary to be pursued by robots, even when the robots are kind of cute.

Basic stuff like picking up items, lots of people do that well. But how do you move around in large areas, like you need to, to really feel like you're sneaking around a complex? In a super smart way, with the use of a teleportation grenade akin to Unreal Tournament's Translocator, but better. In a stealth game, typically you have the advantage of a camera decoupled from yourself to give you greater awareness. The way it works in Budget Cuts is like this: after you've fired the grenade, you have a little portal on the hand you fired it from that sees from the perspective of the grenade. You can move your hand around and look in any direction before you "leap" to its position. There are many people trying to solve for this mobility problem, most are jarring, and none are as good.

Space is the game's plaything, and it gives you many opportunities to play with it. For example, you might fire the teleportation grenade up into the rafters through a crack to walk over the rooms, but you can't teleport there because the ceiling is too low - the portal I mentioned before becomes a warning that you'll need to crouch in order to teleport. Yes. For real. Now you're on your knees crawling around up there, looking down a hole at foes feeling like a Goddamn genius. The spatial nature is reinforced. If I open up a low grate, either to look through it for dangerous roboids or to fire my teleportation grenade into, I crouch a little and peek through in what is going down as a Gaming Moment, 2016 even in the first few months of the year.

Even the inventory management is amazing: with the press of a controller button, a little orb appears over your hand in space that you can stuff things in; they fan themselves out for easy picking. Having two hands and being able to leverage them usefully is done with such elegance here - if I find some throwing knives I stuff them all in there, and when I need to get them out, I open up that orb and essentially grab them from hand to hand. All these interactions seem simple, but that's where you lose coherence in VR - when people port IRL dogma, or Gamer dogma, or skip over these low level interactions because they have some other idea they think is cool and they want to get to that. It all has to be considered, because a bad menu isn't simply a bad menu in VR, it's a bad reality, something we humans avoid whenever we have the choice.