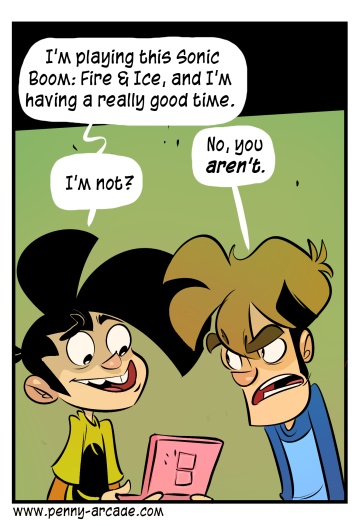 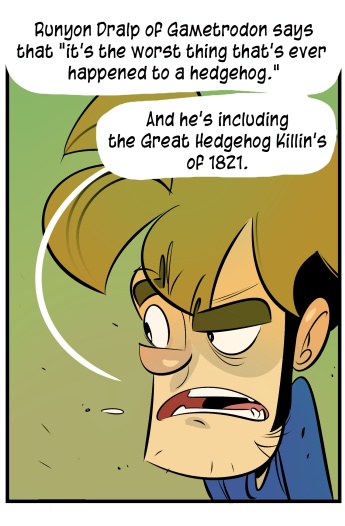 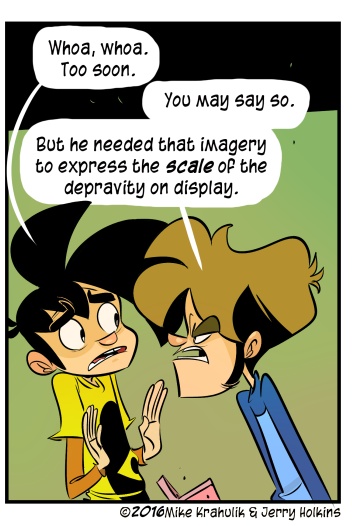 So much about a given Sonic game turns on whether you accept that "Sonic Games" constitute their own space with their own relative scoring system, or if they are part of the overall body of work we call videogames. Context matters also; in the same way that a brackish puddle may provide some respite from the heat of the desert, there's things I'll play when there's nothing else, or shows I'll watch only on a plane. The flight to PAX Aus, for example, has a unique desperation around hour twelve that I'm willing to stuff literally any media into.

As a practical matter, this means that Gabriel enjoyed Fire & Ice but that the franchise has a history of aggression toward its fans and this makes for complex feelings.

Kickstarters are weird; you definitely get the sense when you are running one that your entire being has been assessed by some alien Adjudicator. That's how it feels to me, anyhow. In your mind you kind of have a number that you want it to get to, or you will be a failure forever. Understand that the Thornwatch Kickstarter I'm talking about isn't even our Kickstarter - it's Lone Shark's - but all that's really done is change the target of the assessment. Now, what's being judged is my child.

Except it turned out okay. The game was gonna get made, that got proved out almost immediately. And when it hit about 500k and crept along, I was like, that's good. You can't be unhappy about that. But as I said, Kickstarter is weird. Now it's something like 600k, there's six hours left, and it's not stopping. We might hit the 5000 backers mark, which unlocks the Eyrewood Survival Guide and bonus tokens, when a week ago I'd consigned even the 4500 backer goals to the void. I was wrong about all that stuff. Update 22 has some brand new play videos and other rousing info, if you're into that and are not opposed to rousing. But thank you for the faith; that's the main thing. We will repay it. We've wanted to get this thing out where you could have it for a very, very long time, and you apparently wanted that also, and now we're here.

I talked with Eka over at Uber Entertainment about their PSVR exclusive title Wayward Sky on Tycho Tries!

Eventually Eka starts interviewing me in this one, and that's completely against the Interview Accords, which demand that the interviewing be unidirectional. Somehow, we got through it.