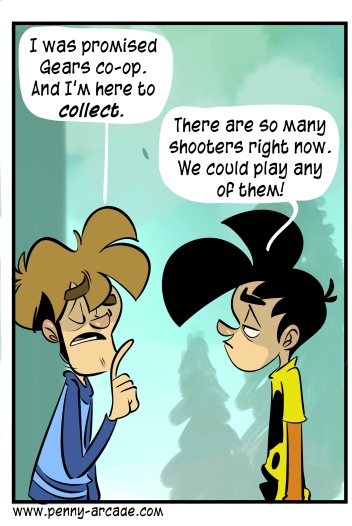 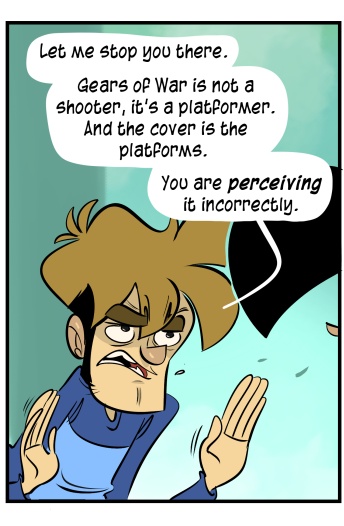 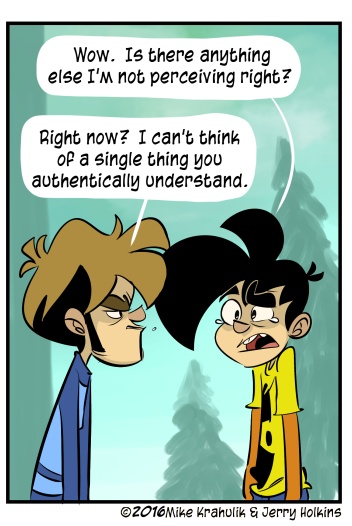 This is how I tried to explain to Gabriel how wrong he was, about Gears, certainly, but also about every other topic. Hummus. Cravats. There's simply a disconnect between him and the reality we experience. I'm fucking with him of course, but I also believe what I said. Anytime the environment is more than just occlusion, my proposal is that we're talking about something that isn't a straight shooter. It was when I realized that I thought of a Gears level not as a three dimensional space but as a 2D kind of maze that I thought there might be something else going on.

I spent a bunch of time with the PSVR over the last few days. The question I asked myself as my left hand shimmied and then sailed into the distance was this: does the PlayStation VR know where my hand is? Because if it doesn't know where my hand is, or my head, and that's why everything seems to be breathing in an odd way, we've got a pretty substantial problem.

My initial experience with it must be considered optimal: I had a chance to try Wayward Sky with the actual Wayward Sky guy, camera placed high, high up looking down. That's one of the major tips you hear about improving the tracking already. Then, the whole thing took place in a green screen cube that Josh had built, whose light was reliable and even. The camera was close, ish. Within four feet. The experience was great, I'd say; a real tip-of-the-spear moment for consumer VR.

Things are not the same at home, and it reminds me of all the Kinect shit frankly. This stuff has to be a good guest in your house: it absolutely must not shit on rugs. I'm probably the only person on earth who had to move a Crokinole board to improve my tracking. But if I'm not close to the camera, my hands are wobbling. Games like Driveclub, EVE: Valkyrie, or Rez - oh, sweet Rez - don't have these problems because they use the regular DualShock inputs and don't endeavor to place the controller anywhere in the virtual space. They're exquisite, landmark experiences. And when I'm closer to the camera, something not every game likes, the hand drifting stops completely - it operates like the much more expensive versions of these products, except it's in my living room. We talked about rituals on Friday, and that's the phase we're at now with PSVR if you go online to seek restoration. Center your tracking area in the left camera, I have heard it said. Recalibrate for different times of day, rasps the sage. Look, I like troubleshooting. But there is troubleshooting, and then there is boiling the organs of things in a cauldron in the hopes that a woman will love you. Right now, the needle on some of this collective wisdom is edging toward the latter.

I can't tell if my feelings on this are because it's actually a serious problem, or if it's the result of my having used prototypes forever, and then retail hardware for substantially more expensive, more future-proof visions of these experiences. I think about the Wii Motion Plus; an add-on peripheral that nearly three years after launch made the promise and perceptual magic of motion controls real. What Sony has accomplished here, with what they had, is stunning. The question is: are they done?