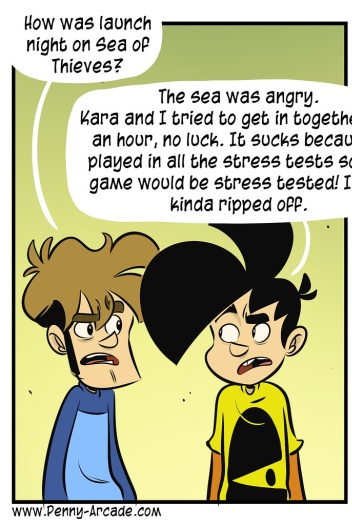 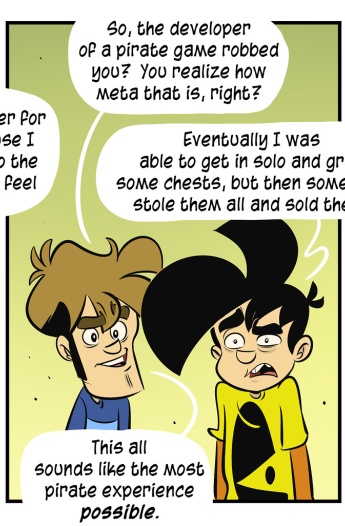 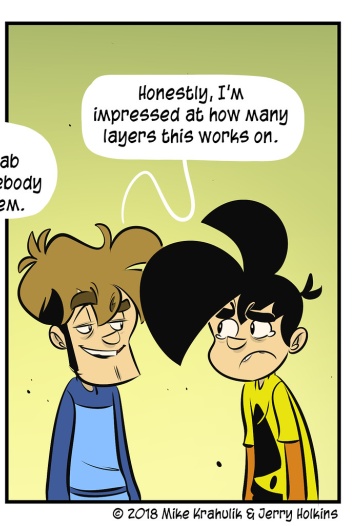 The story is very, very old, and you know it already, but I can distill it for you. A new online game came out and it doesn't really work.

At least, it doesn't work for Mike, or his family. We've catalogued the level of functionality he's been able to glean in the strip. It seems like some people can get on, at some times, so I've included this fact pursuant to the Reasonable Rhetoric clause all public intellectuals are meant to uphold. Now that I've done it, I'm weapons free.

But I don't even want to be mad. I'm dad mad, at best; that anger that burns at a reliable, reproducible rate like a starter cube in a charcoal chimney. I represent the utility smolder. This is the anger whose only outward expression is to establish that you have performed below expectations. You are loved throughout. But there is a gulf, a kind of void, between your potential and your actions and when you force me to live in that place I resent it.

See? I've been dadding for a long time. I can ride that edge.

They were engaged in a dangerous project to begin with, and I'd have been put well at ease if they'd launched well, launch - of course - being a nautical term. The fact is that there are a substantial number of players who apparently can't get an erection unless numbers fly all over the screen when they do something. They don't know how to feel if they aren't constantly told they're a good consumer by the games they play, and so the prospect of a game world that responds to you in a naturalistic way is the same as one that doesn't respond at all. Rare made something very, very special here, so special that people don't have a mental bin for it. I feel like there's a window here where the concept can prove itself out and I want it to have the best chance of doing so - this means, among other things, that people can log in and play.

I'm looking over at Twitch right now and it looks like all kinds of people can get on, and there's over a hundred thousand people watching others play. This is how I want it to go. I want it to live a long time, and that means letting people see the game I know.