I don't remember if there's a podcast for it exactly, it might have been after the fact, but somewhere in his rodent mind eleven o'clock in the morning constitutes an afternoonian span. It's devilry and/or witch-work; no doubt a data point in our species' tawdry decline. 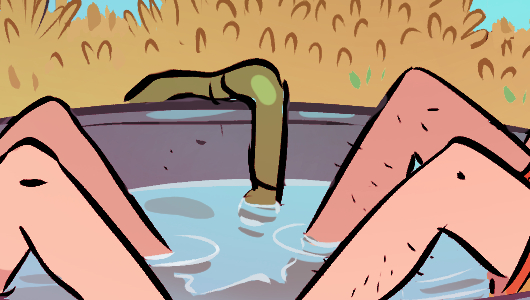 There's two new Welcome To PAX Shows up, one for Cosplay and one about For The Watch, which is something I'd love to do again. But I'm also putting together something else with Josh that I just need to think about out loud.

I streamed something I called ELI5 a ways back with Soren Johnson, one of the creators of Offworld Trading Company. It's a super weird game to play if you are dumb. I thought I wasn't dumb before I played it, but I was quickly disabused of that notion. It reminds me of this ancient strip by my friend Kris Straub; I just want to expose myself to whatever rays these weird minds are giving off and try to absorb as much as I can.

I'm filming another episode of ELI5 today to accompany the one I filmed two days ago, to follow it I suppose, the same way one might swallow a spider to catch a fly. I get very nervous on camera. I don't really understand one hundred percent how I got a job communicating to people under these very real conditions, but there you have it. It is only my very real curiosity about these creators, and what they do, and how it maps to my own process for making something out of nothing that tamps down the fear. I want to ask questions that would be rude if anyone else asked them, someone who didn't genuinely understand what is at stake when you expose your entire being in this way. That's something I understand very, very well.