I did not win my Gears of War 4 match, even though I should have, and the stars were right and there was a grand conjunction etcetera. So now I'm on the prowl for a game that leverages the substantial delta in our relative physical strength. And while I might not have won in the traditional sense, I did win in another sense and maybe that's the most important thing. 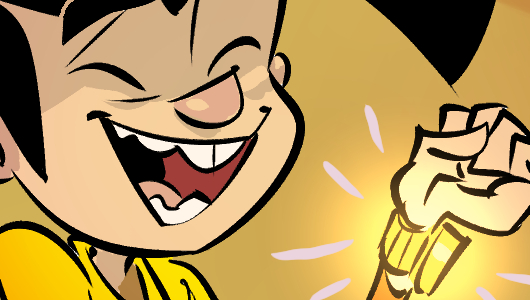 I'm still sort of ringing from the best PAX on record. People always thank me, like I was the seed of it, planted in the earth, and then the show branched out, but I know the truth. I was at the Enforcer Afterparty last night, where some even thanked me for PAX, when they're the ones who make it possible - whenever a show closes, I thank them first. I call them the literal spine of the show. It's hard to imagine how you could have a convention without Enforcers, although I understand that some do attempt it.

If you long to be a cool person, someone privy to arcane PAX mysteries about that which is neat-o, the games I heard about most at this show were:

- Tumbleseed, a game the creators call a "rolly roguelike" about moving laterally in a world that hates you,

- and Secret Legend, a game about what it's like to go on a beautiful adventure while also being a very small fox.

Now you're set up.

And hey, the Tycho Tries talkshow experiment continues with Hidden Path's Defense Grid 2 Enhanced VR Edition, which I thought was pretty fuckin' interesting. Jeff Pobst, one of the people behind it and a fellow survivor of the bleak, nightmare forest called Spokane, came along for the ride.

My ill-fated turn on Minecraft: Story Mode comes up again; I promise that's not a theme. Apparently it affected me deeply. I love doing these videos, though; I think it's time to sic the designers on this thing and make it a real boy. ALSO:

New momentum track is up, with cool rewards! I knew that knots were cool conceptually, that's why I put them in Thornwatch, but I didn't know how cool they were literally; I saw some amazing work around wrists and tied to trees. I can't wait to start rolling some of that into the official lore - send in a knot with how you think it might work in the Eyrewood to kickstarter@lonesharkgames.com and when we hit fifty, we'll start cracking on a guide for backers that details not just what they mean to the Thornwatch, but what they mean for players as well.