I'm still on the prowl for a Switch, so I can't speak to it personally, but Grabe is having a premium experience with the new Wonder Boy. That just which just reinforces two things I thought already: one, I need to steal a Switch from one of the other people here, and two, that a lot of the stuff I'm going to like best for it isn't going to be on a cartridge. I guess this all leads into a corollary, or maybe even a Point Three, where if you don't have a plump SD card slotted in that thing it's entirely possible that ur doin it rong. 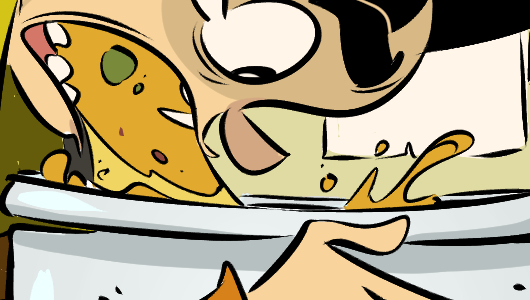 Mike Fahey's blog "Kotaku" dropped a cool take with a video that I enjoyed quite a bit, one that shows the visual swap presented in the strip.

I wanted to mention that Exceed Kickstarter again. I did already but I've been thinking about it a lot after we played it on the stream. And maybe it's actually EXCEED? I don't want to yell. And now that I'm even better acquainted with the game, I'm excited play Carl in there - surprising opponents with buffed "normals" and reclaiming your favorite attacks sounds like good fucking times.

I played a round yesterday with Kiko using Season One characters to show him the ropes, and generally when you play a game with Kiko it ends with a period of silence followed by a list of what's wrong with it. Even though he is relating the information verbally, you can tell somehow that it's prepared in a bulleted list and the text is kerned for maximum legibility and effect. He said, "I'd like to play that again," which is... I don't even know what that is.