It was the first 'frame he'd ever made from blueprints, so I think he might have been extra excited to wear it? In any case, paying to accelerate time is a core freemium notion and even though it's not efficient to pay for something that would happen anyway, it does allow a very particular, very limited form of Time Travel. 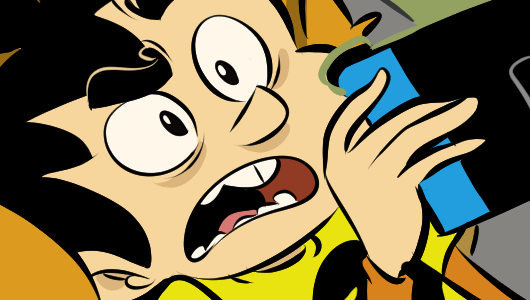 I said I was gonna talk about Artifact after the strip, but I was much more focused that day trying to make sure as many people as possible knew about Gav's WASD Line. Now I have a second to talk about it.

It would be hard to list all the card games, digital or otherwise, that I've advocated for in these posts. There's plenty of servile adherence to Magic in the space, to be sure; the fact that people can still profitably duplicate Magic: The Gathering after more than twenty-five years must be seen as an index of Richard Garfield's genius. Indeed, people have taken the deckbuilding concept alone and created not merely games but a genre from it. But, yes. I'm obsessed with the form, and almost pathologically compelled to perform apologetics for it.

I couldn't even choke down the Artifact tutorial. That is incredibly bad news.

Note, please, that I am the one who tends to wounded fawns around here. I can look in their glassy little eyes and see the bright thread that connects all living beings. I feel like my pedigree for coming to the defense of misunderstood, fractional genius is unassailable after twenty years of it. Except Artifact is what happens when you hire a rockstar designer, have functionally no budget, and nobody in their anarcho-syndicalist commune has the moral authority to say "No."

There's so much wasted effort here. They need to completely revamp the tutorial process to start with a single lane, which then expands to their customary three and makes it seem like they're adding something. See, the big idea is that you are sort of playing three games at once in each of three lanes. Which would be fine, except each lane is functionally an entire game and I'm pretty sure people aren't looking for their digital card games to take longer to play.

They've spent a lot of time on these cutesy animations, I assume so they can sell you more of these little assholes that jump around on the screen, but it's like an artisinal Clippy or something. Imagine if you could buy an upmarket Clippy at a Farmer's Market, between the Jam Lady and the Kombucha Dude. They're always getting in your fucking face. The whole visual experience is just overwhelming and they need some fucking grownups over there.

You know what would be cool? If I only had to do my lane. If the card game were like Actual Dota - it's about me cooperating with other people to succeed, and just like Dota surprise lane switches and camaraderie were the whole deal. The universe where this is true sounds like a cool place, and I am going to spend the rest of life building a machine to go there.

The innovations here, and they do exist, are on the business side: the game costs money because the cards are more "real" than in other digital CCGs - they aren't locked down to accounts as they are in the vast majority of these things, they're your property, as a whole and individually. I think that's pretty cool and it would be even cooler if it was associated with a game I wanted to play.

I think it's worth thinking of Richard Garfield's work in card games as a trilogy, one that goes Magic: The Gathering, Netrunner, and ends with Keyforge. I can explain more about that framework later, certainly hit me up at PAX Unplugged this weekend if you want to talk cards or Kill Team. Artifact isn't on this list.