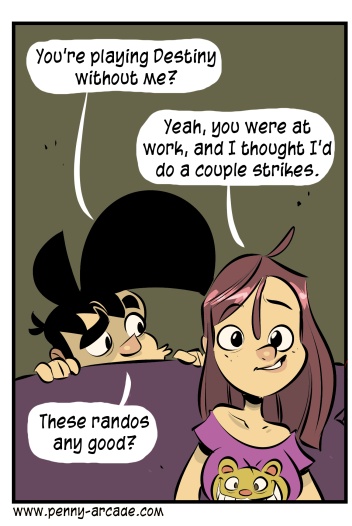 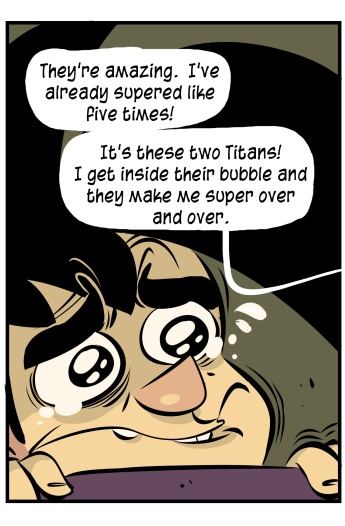 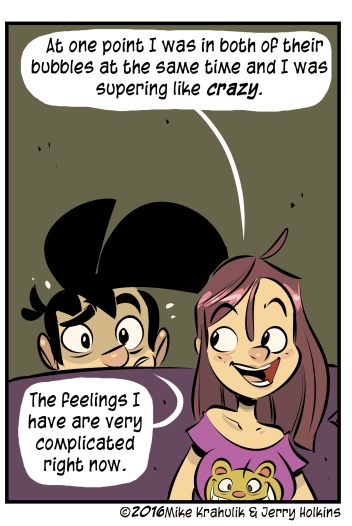 Sometimes you need to rely upon the kindness of strangers, or perhaps their unkindness, directed toward the weird, alien snout of the foe. Snout, or beak, or whatever. Some fucked up alien face thing. One never knows what they're going to get in this context, we've discussed it.

Then again, there was one time where we hadn't gotten all the way through Vault of Glass on hard yet and we needed a sixth, so we picked one up, and this motherfucker basically taught us how to do the whole thing single-handedly. Materially speaking, he had been matched with five worthless pillars of sentient garbage and somehow transformed them into holy prisms. He experienced what I complain about here, times five, and still managed to comport himself with equanimity. There's a lesson there for us all.

Sometimes you're a person who needs two randos, though. And maybe there's a conversation about that. Every couple is different.

I had an incredible time with Soren Johnson of Mohawk Games unlocking the secrets of Offworld Trading Company, and if you would like to unlock them also, here's an archive of the Twitch stream. Within that ELI5 framework, there's a lot of stuff I want to learn about - all of it techy, but not all of it games - and I'm going to start putting this deep ass Rolodex to work.

The major takeaways, though, are that you choose your faction during the game, not before - it's a real decision that should be based on the actual map. It's not something you can meaningfully decide beforehand, like if you want to play Terrans or whatever. And you don't just build things and forget about them like in a regular RTS - the building has value, but it's the actual plot of land it's built on that is the purest resource in the game. Learning to repurpose that property in harmony with the market is, functionally speaking, Offworld Trading Company.