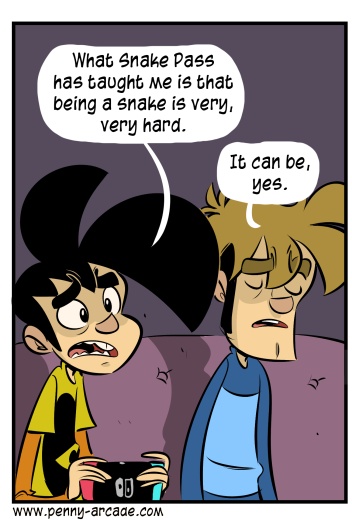 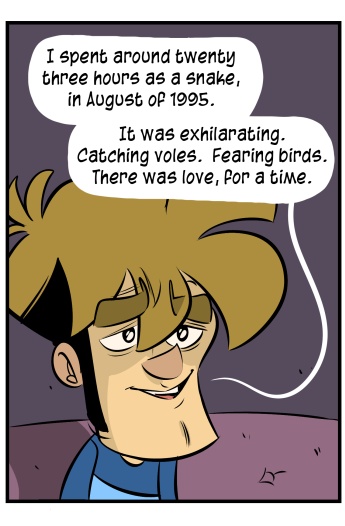 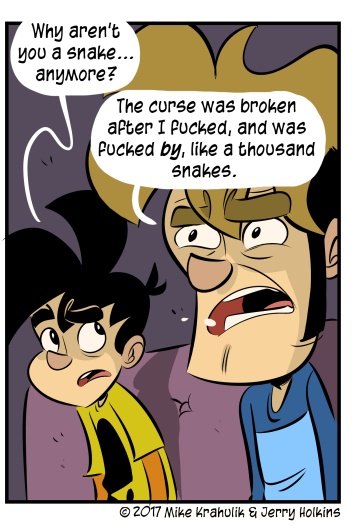 Teens, we were "kicking it" last Friday recording some First 15s when we started playing Snake Pass. I often leverage the Wednesday variety stream or the Friday stream to play games on the Switch, because I don't have one yet and I deeply crave its use. We played entirely through the two player campaign of Les Sneepaircleep, and I nearly wept at its conclusion. Snake Pass is not a game about transforming your friend into a tool made exclusively for your purpose, and thus loses points.

It is original and fun, though, so it may be that there are opportunities for point regainment. It is also hard as hell. I would say that it is as strenuous and difficult as trying to seize a real snake with your mind and then command it through a mini golf course. The snake itself is essentially a physics toy that must traverse some pretty devious shit, all via a fairly basic recipe of inputs: move forward, raise head, tighten, and "have a bird pick up your butt." It's a novel menu.

We only played it for as long as we were running the stream, a couple hours really, but I remain curious about it even though I sense that what I'll be asked to do in this game will only get progressively more fucked up.

Something that comes up a lot at PAX is how open we've been about mental health issues. Specifically, our own mental health issues. We have them! Gabe and I don't have anything approaching the same ones, but between the two of us we can usually build a bridge to someone wherever they might be. Something we've offered at the shows is the AFK Room, a place for people to recharge after a few hours in the social environment of the show, which is something that affects people differently.

We partner with Take This on these rooms, which they staff with volunteers and clinicians. It might be that the AFK Room is the first experience someone has with an understanding ear; I know that not wanting to burden friends with "your stuff" keeps a lot of people isolated. In any case: Take This is in the last day of their Kickstarter drive to raise funds to deliver services, and it was our honor to offer a custom Pinny Arcade pin, drawn by Mike Krahulik, at their $50 tier. If you've made use of the AFK Rooms before, or if you'd like to know more about the work they do, please spend a few minutes on their Kickstarter page and consider pitching in.