I know that I have certainly wondered why they don't just fuckin' 86 this Kotick guy. Life can be incredibly complex. Even an attempt to buy spaghetti sauce is confronted with an impossibility of options. Easy choices are an opportunity to celebrate, and this is the easiest one yet: Fire Bobby Kotick.

He could just leave, and he's said he would, if some specific thing he wholly defines doesn't happen within an amount of time he also wholly defines. That's, uh… huh. I don't know what that is. Not information, surely. If the pressures you or I are already aware of have been insufficient to peel him off his Golden Throne, I'm open to the idea that some pressure we don't know about could do it - but now it's a pride thing. And even if he's extracted, the result will be that he becomes wealthier than you, and me, and every other person we know combined as a result of that exile. I am a very imaginative person, I'm literally imaginative in a professional capacity, and even I have a hard time spinning that as a W but this motherfucker has to go. He should have been gone even before they got into his own shit.

So, it's clearly the right play, the stock is in the shitter, and he won't do it unless he's moved to do so by some alien ray from another universe. Why is it like this? Why haven't his hideous, bat-winged coterie strapped him to a rocket purely out of self-interest? Well, they were made profoundly wealthy by their proximity to him, and they started out occupying an echelon of wealth and privilege that is frankly beyond our ability to conceive it. They actually own the things people rent to flex, and you've never fucking heard of them. Their rarified position doesn't comfort them, it actually makes them incredibly insular and superstitious. They don't really understand how any of it works and they're terrified to lose it. Kotick isn't responsible for this organization's success, but he was there when it happened; I swear to God, it's at that level. At the apex, and in the valley, a kind of mysticism holds sway. They can't hold him accountable without threatening a suite of fundamental beliefs about themselves, others, and the world they rule.

If you were ever wondering why… everything is so bad, hopefully that will help you model the arc. It is, in part, because our masters live in a parallel dimension.

My eldest son Gabe got way into Arcane and once he had seen all of it he convinced Kara and I to watch it as well. I thought the first episode was cool but by the third I was 110% in love with this world and these characters! I just had to do some fanart of VI and Jinx. 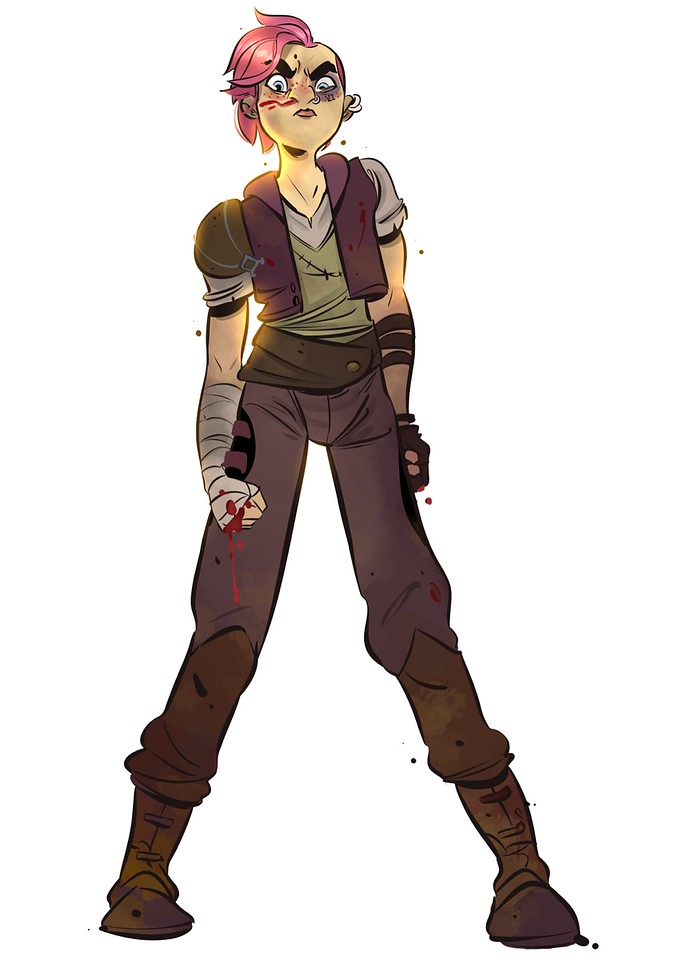 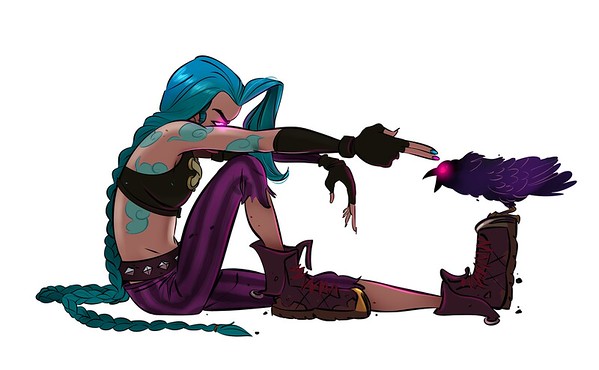 Arcane is on netflix and even if you're not into League of Legends I highly recommend you give it a try.

When Rito announced a couple years back that they were going to do everything, literally everything, all the time, I was like, "Damn, that's a lot of things." You're trying to beat CS and Hearthstone and Street Fighter and also, like, Dota again somehow, which is sorta funny because this last one kinda brings the company full circle.

The next few paragraphs should be about how pride cometh before a fall. You know? It should be about how they tried to do way too much shit way out of their ken and natural law itself had to step in to tamp man's hubris. We could detour into some wild theorizing about heat-resistant wing compounds. But the card game was, and is, incredible. And, at least when I played it, incredibly generous by genre standards. Valorant is dope. And now they made a show so good it tempts even the casual observer to install one or more of these things. Again.

And I sorta thought Ruined King was gonna be a reskin of Battle Chasers, that woulda been safe, or even good. Shit, it coulda been a reskin of Darksiders Genesis and I'd still be down to clown. It would have been beautiful and cool in either case, "sweet," in that nineties way - a way mothers abhor! - with a few giant, exposed skulls here and there to let us know malevolent forces truly mean business this time. But it's got all of my favorite JRPG shit in here, with overworld exploration and legitimate twists in the classic initiative bar. They could have engaged in incredibly mercenary behavior here, as they could have with every one of these excursions of theirs, and it still would have worked in a purely business sense. Instead, they tried to earn it every time, and then did.

I ended up having two separate Thanksgivings; It's not really Thanksgiving in my house unless it culminates in a cathedral of rich bones I can morph into a week's worth of dinners. I go into all that in the Club PA strip that drops tomorrow, but in any event we discovered the endgame strats for Thanksgiving and it involves doing major surgery on a bird.

Because I am abreast of all the hottest trends, and my familiarity with the clock app is profound, I knew that the way our fathers cooked turkey was a barbarous holdover from an unlettered "age of darkness" where giant fowl were roasted inefficiently. A mysterious void stymied all attempts at uniform cooking, and filling it with bread and holy spices only made it a vessel for ravaging disease.

Spatchcocking - the definition has some interesting breadth - is a method of preparing a bird where you cut out its spine with poultry shears or, as I did, to fully defile the creature with an ordinary pair of kitchen scissors terrifying all lookers-on. It had a WWE feel, and at some point in the middle I thought maybe it was going to win. Eventually I was able to find success because it was essentially an object while I was a conscious being, but it was closer than you think. My inarticulate hacking produced nearly a half-cup of razor-sharp "bone shrapnel" and I think, I think, I got most of it.

It is STILL the Holidays. If anything, with multiple bird days behind us, the Holiday mix by volume will only increase from here on out! Here are the stratagems you can employ on the store to maximize your trip:

The Child’s Play Charity dinner auction has gone virtual again this year and that means you can pick up some tickets and bid on cool stuff from the comfort of your own home. The auction will be on December 2nd this year and I’ve got a sneak peek at some of the items you can get your hands on.

Here's a prototype of the Thornwatch game we made a a few years ago.

Original acrylic paintings by someone who loves Kris Straub but is not him!

In fact, in addition to this stuff I also donated an old sketchbook of mine that has some pin designs, Thornwatch box covers and a bunch of random doodling. I also handed over my collection of Dungeon Tiles so that they might grace another Dungeon Master's campaign.

So head over to the official site and get your tickets for our virtual event today! Help us raise money for Child’s Play and get yourself some goodies in the process.