I have had Rats, at one point the house I thought I was living in turned out to be a warm heap of mostly stationary rats. I have also had water that came into the house after it had fallen on the roof. This is super important: if water comes in, is that even a roof? Isn't it just a very expensive, tremendously inconvenient colander at that point? There was a discoloration in the ceiling at the center of the living room, and when I touched it, my finger went straight through. It had the consistently of oatmeal. People don't make houses out of oatmeal generally, and in that moment, I understood why. 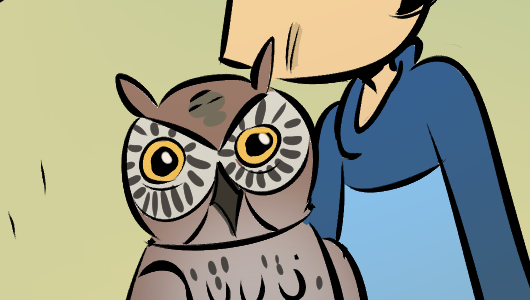 As a material, it's simply not up to the task.

I think that birds are pretty rad. I did not name our fourth volume of comical strippery and adjacent prose, called "Birds Are Weird," because that's the last thing they are. Birds have got it fucking figured out. And corvids?! "Forget About It!" as some are wont to say. I've been watching a woodpecker go fucking hog wild on a tree in a neighbor's yard, as in, I watch it as much as I watch shit on YouTube or Twitch, always with a memory resident process designed to delight maximally in the misfortune of another. When this dark joy had reached its zenith, perhaps it glinted somehow, because practically the next day he decided that there were expansion opportunities in my own roof.

I didn't have to turn to a false owl, at least, I haven't yet, though this is a common bird deterrent. The owl apparently acts as the bird version of Don Corleone. What I have up are reflective strips of foil, and it occurred to me how much like another countermeasure it was. I stood framed in the window for a while, pleased by my own cleverness.